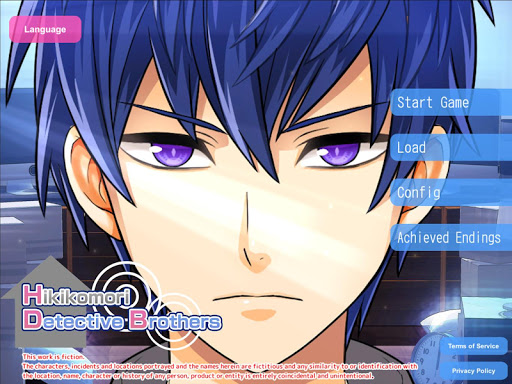 “【Otaku Visual Novel】Detective Brothers” – Incorrect answers are an instant NO?!
A multi-ending system filled with tragic ones if you let your guard down!
Control your pitiful brother!!
Maneuver him so he can become a decent human being!
A casual game depicting unique characters fully voiced!

Story
Shizuku is my older brother who lacks in vitality as well as social skills.

He’s good looking yet far from a womanizer.
So he does a search on how to become popular with women on his computer every single day.

The other day, he didn’t eat anything
and was devoted to his so-called “”research””.
His fridge was filled with food products yet
he almost died from starvation.

I almost lost him
if I didn’t cook something for him.

So as you can see, he is quite a character.

I must take care of my older brother yet again another day.

…I am already worn out.

I want him to be a decent member of the society and
free me from the burden.

My brother has amazing data processing skills and
the ability to sympathize. Utilizing those skills,
he works as a detective in between his research for becoming a womanizer. He works on his computer without leaving his house.

He is quite competent.

Detective work.
This is the only media that connects my brother with the society.
I want to smartly take advantage of it.
Not to mention, his research has never helped him before.

I will have my brother solve cases and get him used to the society.
And make him a decent human being.
I will do my best.

■Notes
✓Make sure you have an internet connection when you play.
✓Update your device’s software to version 4.1 or later to play.