“Indoor Soccer Games: Play Football Superstar Match” – Are you ready for the biggest futsal competition? Top football games club from the world are gathered for indoor soccer battle. Play the most realistic mini soccer games to live your passion. Kick hard to reach the net. Extremely tough conditions & professional players are not making it easy for you to strike and goal. With some cool modes, you have to play the qualifying round to enter a football trophy room.

With some cool kicks’ features, your penalties & kick abilities will be tested with ragdoll obstacles Prove yourself the best football games player. You have to be clever and fast while playing indoor mini soccer match. This football strike match is made to train you for super soccer games. Be the score soccer hero and play with your super 11 teams. The gameplay is simple. You have to dodge the ball among your team players by giving your best kicks, strike the ball to the net to goal, and try to get the ball from rivals. The soccer games revolve around your striking kick skills and how hard you can goal.

Training:
Train your team for playing fantastic soccer matches. Play as a trainer and guide your soccer superstar team. You are the football sports manager.

Knockout:
Choose your team and beat the other two competing teams to win the knockout round. This round brings the fiery football games for you. Knockout anyone who’s your rival to win this dream soccer games.

Tournament:
Play football with 9 other nations and WIN the tournament by getting maximum points. The other teams are top soccer game stars from different countries all over the world.

Take control of your team on the field during league games or tournament games. Starting with a rookie team, you’ll need to improve your players’ abilities to reach the top league and compete against the best teams in the world for the championship and the cup. You will enjoy these ultimate free football games. 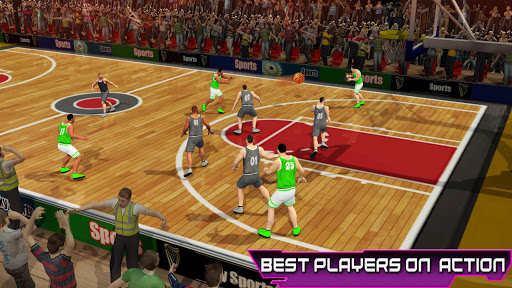 PRO Basketball Games: Dunk n Hoop Superstar Match is an addictive game designed for basketball fans that simulate realistic physics and features great graphics. In this game, you will play real matches with challenging rivals teams. There is a quick play mode where you just have to enjoy the real simulation of a basketball game and play tournament. This game simulates realistic and amazing graphics. Prepare yourself to experience the extreme fun of playing the best basketball game with real stars. In direction to win the game, you have to make the best bouncy hoops, shoots, dunks in the opponent’s bucket goal. Let’s try to target the hoop quickly, aim, and shoot like a pro player into the goal. Quickly pass the ball, trickle down the court, and shoot to get in for the slam dunk.

How to Play:
You need to score as many points as possible within the given time. Dunk a ball and score a three-pointer or a jump shot in this basketball game before the time runs out. Block your opponent’s basket shot, dunk, and do counter attacks to score and win this awesome 3d basketball game. If you like basketball games then you will enjoy that game.

• Build and manage your jam team
• Choose your team among the top 40+ basketball players
• Improve your players by win matches to earn coins
• Super fun sports simulator game
• World integrated global leader board
• Enjoy different basketball game playing modes
• Training learn your ball practice and dunk, dribble, shoot, and hoops techniques
• Quick play 2-on-2 action, a friendly match between selected teams
• Story mode a 5 on 5 actions, compete with the best jam teams of the world
• Top fanatical basketball stars teams to win a world cup
• Knockout you have to win all 8 matches to be a knockout winner
• League again play with the best teams. The team with the higher score at the end will be the winner
PRO Basketball Games: Dunk n Hoop Superstar Match Features:

• Added World integrated global leader board
• Enhanced training and learning with ball practice and dunk, dribble, shoot, and hoops techniques
• Improved quick play 2-on-2 action, a friendly match between selected teams
• Added Story mode a 5 on 5 actions, compete with the best jam teams of the world

“Soccer ⚽ League Stars: Football Games Hero Strikes” – The countdown is over & soccer league season started. You have the world’s best soccer players from all around the world in your team. Excite the crowd with every goal hit, free kick, penalty and backing in free play, pro challenges, penalties, and soccer cup modes. Build your dream soccer team and prove yourself as a hard striker in the live football gameplay, dodge opponent team goalkeeper, and enjoy the thrill of crowed. This game will have you hooked for many challenges as you take your team to the final match. Would you like to play a live soccer game as a real football superstar and start a career as a pro soccer player hero from the start of the tournament to final match victory? Now play the football game with your favorite national soccer team hero and win trophies of each world cup challenge. Improve your dodging technique, shot, and accuracy. Free kick and pass the football to their goalkeepers. Free kicks, penalties, clean football dodging; dribbling with your ultimate team, and your powerful final free-kick, no team player or goalkeeper can stop you.

In quick play mode, you need to score maximum goal & win a single match against the opponent team under different time interval modes. Friendly Battle mode where you just have to pick your team and the opponent team and enjoy the real football simulation in this soccer game, or you can play soccer championship & world football league with different teams throughout the semifinal and final.

How to Play & Win the Soccer Super Stars League:
Soccer dream league game has a 4-dimensional camera view to enjoy the game, immersive 3d graphics, and a powerful soccer game engine that will bring your coaching skills on top. Easy and intuitive buttons to control the ball and the multiplayer soccer, Goalkeeper. You can do an accurate pass, quick dribbles, and perfect shoots to score goals and build your way to success. You can also manage your favorite team as a soccer manager and lead it to victory. 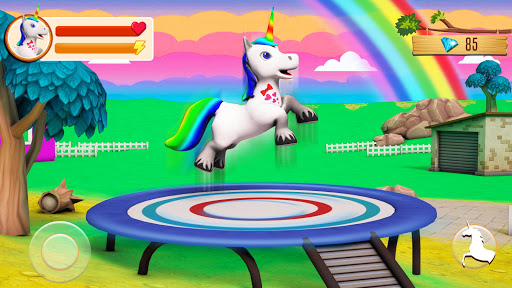 Watch your pony horse character health indicators, if energy level drops there is no chance to survive. Provide safety to sheep from bad unicorns, dragons, and wolves that will earn you rewarded money. Learn how to ride your pony slime magic horse in the town life simulator and find magic places like fields, forests, mountains, gardens, and villages. To survive in the magic rainbow forest, you need to use all the possibilities. Obtain experience by performing tasks, defending yourself against other animals, and collecting food. Get more fun in the water park and entertain yourself in the unicorn games.

Animals Wild Life & Jungle Survival Adventures:
Safe the pet sheep that is near the fire, get water from the lake in a bucket, and extinguish the fire. A bad unicorn horse attacked on sheep, a safe scapegoat, and take down the rival pony with a magical horn. A wolf attacking sheep, find the wolf, and take him down through the magical horn. Move around and find an apple tree to eat the apple, hitting a kick on the tree will drop apples and eat the apples. Need to drink water, find water lake. Point the horn to toxin water to make it clean and drink it.

Unicorn Horse Racing Simulator:
Start magic horse racing with jumping obstacles. The flying unicorn needs to train himself for the race with other pony runner unicorns. Before racing finds the trampoline. Jumping on the trampoline will increase your mare stamina. Jumping over the obstacles then go through the rings. Try to pop the balloons & searching for the precious gems hidden in the bushes that will increase stamina. Find an apple tree to eat some apples. Run fast and open the gate of that boundary and lead all mounts into the building area.

Unicorn Escape & Pony Life Survival Simulator:
Fight for your wildlife in the town with other magic horse family members, search for food and water, and using water to extinguish the fire to playing this slime unicorn pony life survival simulator. The real experience of colt life survival while escaping, hunting, and jungle exploring all in one single girl’s game. Escape from wild wolves and survival in the jungle is no easy task but hunting will provide you food like orange, and clean drinking water. Unicorn games are specially developed for those who are ready for extreme nature life adventures.

1) New app tracking dialog added regarding app tracking purposes. For best ad experience, you can allow us to collect data.
2) Now you double triple your rewards by claiming them on daily reward menu
3) New in app offers are added so you can easily purchase best offer you want for your unicorn
4) New Unicorns are added with better controls and improvements in levels have been done.