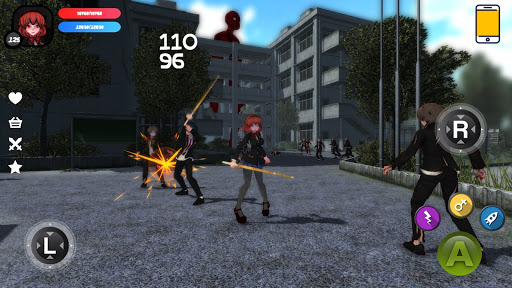 “Dead School – Anime Zombie Survival Horror RPG” – Your fate is to fight alongside Sakura and Kaoru, the schoolgirls in escape from evil zombie apocalypse at kagura high school on this anime simulator and survival horror RPG! Obtain free sword and guns from enemies ahead, or customize your skill hand to create your own epic and powerful zombie hunter in this game!

On a fateful day, dawn of a zombie outbreak has infected the last school resident by daylight. And all the Japanese university and highschool students becoming the walking zombies. The story follows the zombie attack on genius high school boy and girl as they are fighting with a mysterious apocalypse event known as the “White”. Together, they are going to kill all the undead by ninja slashing, tactical shooting, or beat em all to the after life to become the school zombie hunter or dead in this anime horror games.

Survive nightmare attack on the creepy corridor ahead, or strike them at dark of the forest night in order to survive. Don’t forget to craft fruits or potions like lollipop candy to avoid being bullying by supervisors. Into the daylight, they are just a normal students, but after night, the left gangster city students will become scary zombies to start the rampage. You will also encounter mrs. senran, the sexy but scary teacher if you leave your classroom at days.