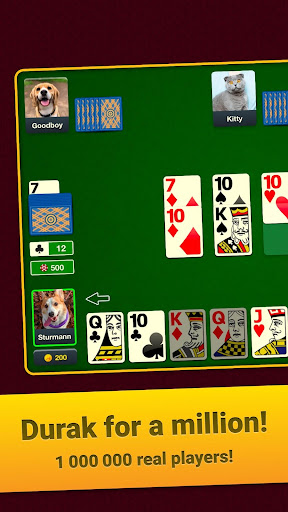 “Durak: Arena” – We have dealt 6 playing cards at the deck, the trump card is Hearts, you are having “six”, it the youngest, the first move is yours, we are beginnig…

Durak Arena is an online version of the most popular Folk Russian card game in PvP mode.

There is a cozy green tablecloth, dynamic 3-minute game sessions, convenient chat and gifts. Now there’s nothing to distract you from your victory. You can cheat like in a real game Durak, use tips, get to the top of the game TOP and participate in weekly tournaments with players from all over the world.

The 10 best Durak benefits:
1. You can play Durak online for free.
2. The PvP game model — Person vs. Person — you fight real people.
3. Every day we give bonuses to all players.
4. There is > 1 000 000 registered players.
5. Thousands of players are in the game online every day, non-stop, 24 hours.
6. You can use is cheat-ability and catch cheating opponents: there is gadgets “Сheat” & “Anti-cheat”.
7. Facebook login to save all the achievements of the game Durak from the beginning of authorization.
8. You get access to a detailed statistical the game Durak: the number of games played, the percentage of winners.
9. Players have a common TOP rating. The Durak Arena has 9 game leagues = 9 levels of your success!
10. Coming soon: The game has a convenient chat with emojis and stickers as a gift for game partners.

We took care for comfortable gaming at Durak:
We support players with bonuses.
We reward players with game currency for achievements.
Supporting players via email.
We regular release of updates for the application.

You can download the official Android version for free.

Update the app & good luck in the game!